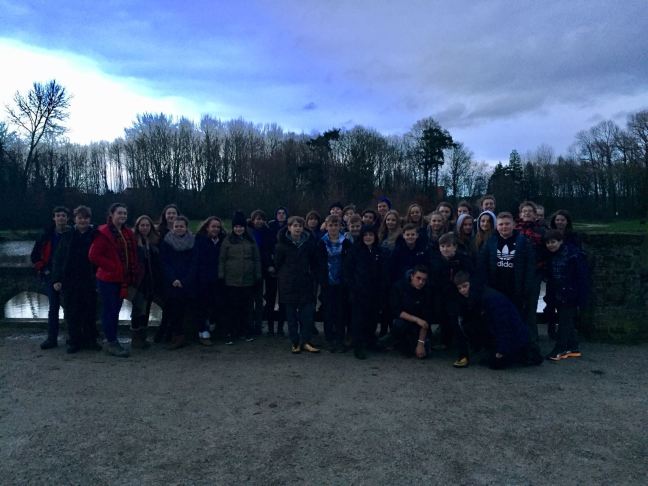 Year 8 pupil Shea reports on a very successful and enjoyable trip to the World War One battlefields in Belgium and northern France.

Belgium was an amazing experience that we all enjoyed – it was amazing! Here’s what we did.

After arriving at school at 1:30am we began our intrepid journey south (and east) towards Belgium. After an hour of excitement and talk we tried to sleep; before the sun started to rise, sleepy eyes began to open. After stopping for breakfast we set off for the Channel Tunnel, where we spent some time in the terminal and took some photos.

After the delays we arrived in France and began to drive to Belgium. Because we were delayed we unfortunately didn’t have enough time to go to Passchendaele (but we fitted this in on Day 2 – Thursday).

After an early start and breakfast of – hot chocolate, croissants, cereal  and so on – we went to the beautiful, awe-inspiring cathedral in Ypres and the ‘In Flanders Fields’ museum. We then met up with our tour guide Pol (Paul) and went to the Menin Gate which has tens of thousands of names of those killed or missing in World War One (and some looked for possible relatives).  We moved on to Essex Farm cemetery, which has a memorial to the Canadian poet of ‘Flanders Fields’ fame John Mccrae. Swiftly we moved to Langemark, the German mass cemetery, were each grave had 4-12 names commemorated, and after that we arrived at Tyne Cot. This has more British and Commonwealth graves and memorials  than any other on the planet. We then managed to fit in the Passchendaele memorial museum, which had reconstructed trenches and dugouts which really opened our eyes to what it was like for the soldiers.

We then headed back to the lodge and after a quick dinner we headed out for the delights of the Christmas markets (but mainly the chocolate shop!). After buying too much chocolate we headed to the Menin Gate for the famous ‘Last Post’ ceremony. After this brief and moving tribute to the dead of World War One, we headed back for some poetry writing then went to bed.

We were woken up at 6:30am and had breakfast and headed to Wellington Quarry in Arras, France. We went underground for 50 minutes discovering the plans and lives of soldiers hiding in the tunnels beneath Arras. Then we journeyed north to go to Newfoundland memorial park. After wandering around this hallowed place (a special place for Canada’s victims of war) for an hour, we embarked for Calais.

Once we had crossed back into England we stopped for dinner then began the long drive home. We got back just after midnight. Belgium was a great trip that everyone enjoyed!